“I want to put Bonaire on the cocktail map”

A Q&A with Sir Eddy Trenidad

ir Eddy Trenidad is an island man. Last year he returned to Bonaire, where he grew up, to open a brand new cocktail bar: Tiki & Co. An unforeseen but exciting adventure that allows the ‘master of tailor-made drinks’ to pursue his ultimate goal, enter the top 100 best bars in the world, and educate a new generation of bartenders.

Patience — Sir Eddy knows all about it. He had to postpone the grand opening of Tiki & Co again and again. Despite the unpredictability of the past year, he seems as relaxed as can be during the video call with Sir Edmond HQ. Behind him, the bottles of gin, tequila, rum and whiskey are patiently waiting for the first guests.

None other than Tom Cruise sparked Eddy’s love for cocktails. “When I saw the movie Cocktail, I thought: hey, that’s a cool guy right there. The first cocktail I ever drank was a Manhattan, made by my grandpa with Johnnie Walker Black Label and Martini Rosso. After that, I started experimenting with mixing liquors on my own.”

When did you actually become a bartender?

“My family moved to Bonaire when I was about five years old, so I grew up here. As a teenager I started working at a beach bar called Bongo’s, where I made my first Mojito’s and Piña Colada’s. I was immediately hooked. When I moved to Chicago to study Criminal Psychology, I ended up at Room 13, one of the few still remaining speakeasy bars from the Prohibition era. The owner, who we only knew as ‘Johnny’, said: ‘If you want to get behind the bar, you’re gonna have to earn it.’ After a month of picking up glasses and cleaning bottles, he was like: ‘Hey Eddy, do you know how to make a Negroni? Why don’t you jump behind the bar and show me.’ He didn’t only pay attention to how I made the cocktail, but also to how I handled the bottles, tools and bar. From that moment onwards, I worked behind the bar once a week and learned how to make the classic cocktails from the Prohibition and pre-Prohibition era.”

Do you consider that to be the start of your professional career?

“It was the start of my professionality, but not of my actual career. That started in the Netherlands, after I moved there to do my Master’s and began working at Vief + Vuig in Rotterdam. A few years later I ran into an acquaintance, Larry Soliana A.K.A. ‘The Garnish King’, who is also from Bonaire. He introduced me to Can Kizilca, a fantastic bartender, with whom he was running cocktail bar Stirr. Around the time they hired me, Stirr had just won both the Entree and Esquire Award for best cocktail bar of the Netherlands. They had a menu, but also played around with tailor-made drinks. That’s when my career really started. Do you want something fresh, fruity, sour, smoky, herbal? Rum, vodka, tequila? Foretaste or aftertaste? You name it, everything was possible. I loved it. A year and a half ago, Difford’s Guide introduced me as ’Sir Eddy Trenidad, master of tailor-made drinks’. I thought that was very cool and fitting. I want to be able to make any kind of drink, because everyone has a different taste. In the Caribbean we always say: ’Island people got taste’. And it’s true!” 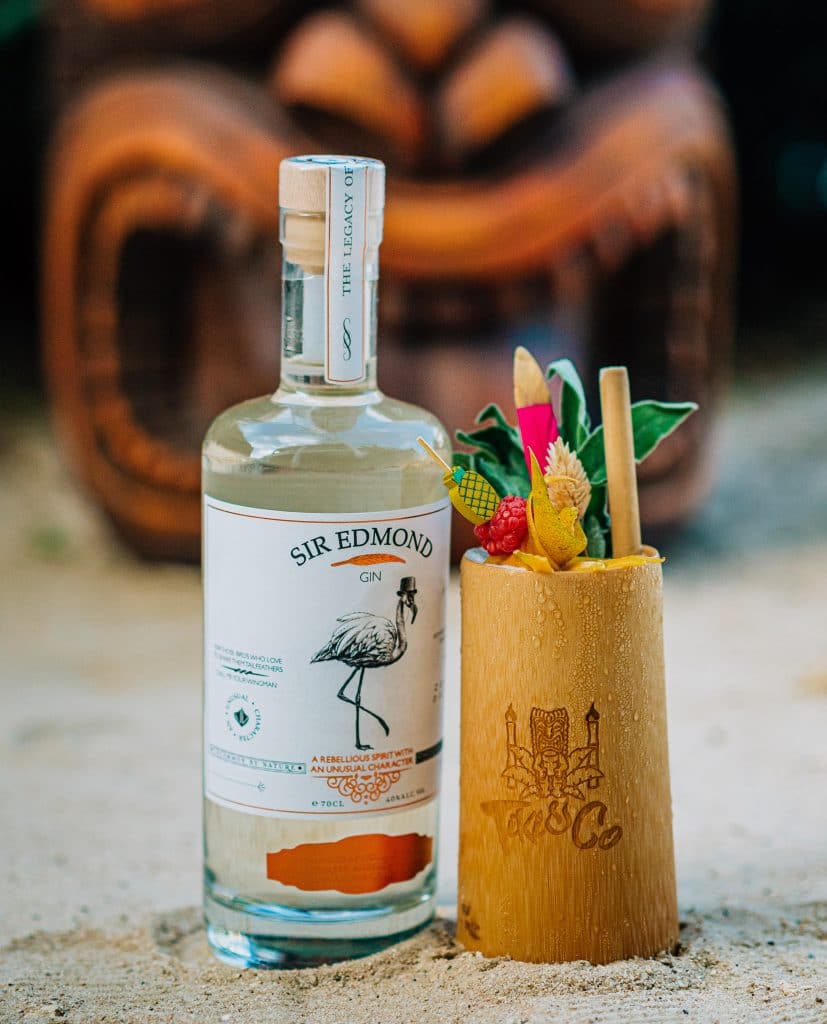 Where did you go from there?

“Before Stirr, I did a lot of traveling, to Hong Kong, Japan, Spain, London, the US. I wanted to get to know the taste of different cultures and visit as many of the top 100 cocktail bars as possible. Some of the world’s best bartenders are now good friends of mine. I learned a lot from them, and created my own style and identity along the way. When I left Stirr, I already knew that one day I was going to open my own cocktail bar. I just didn’t know how, when and where..”

Your dream came true in Bonaire with Tiki & Co. What do you want to achieve?

“Tiki & Co will not just be about cocktails and indulgence. When you walk out of the bar, you will have learned something new. I also want to organise monthly tastings and masterclasses for young, enthusiastic bartenders. From a culinary point of view, the island is already very developed. I want to put Bonaire on the map when it comes to cocktails. My mission is to: aim for the top 100.”

“I will keep making tailor-made drinks, because that’s what I’m known for. In addition, I made a menu with complicated tastes that match the sweet tooth of people in the Caribbean. I hired an Argetinian guy who knows a lot about the culture of Tiki cocktails. I am positive that soon we will be allowed to run the bar at its full capacity. I have one rule at Tiki & Co: it’s seating only. I would rather preserve the quality of our drinks and service, than have a packed bar where people get their drinks immediately but the quality suffers.”

“I got introduced to the brand when I worked at Stirr. I remember thinking that the bottle looked really original: simple but very charming. When I opened it and smelled the Bourbon vanilla, I was hooked. I tried it with Fever Tree, East Imperial and Schweppes, but Thomas Henry is my preferred tonic with Sir Edmond.”

Did Sir Edmond make it to the Tiki & Co menu?

“Certainly! The cocktail is called West Indies Phoenix, and contains Sir Edmond Gin, Teeling Irish Whiskey, Absinthe, kiwi, coconut and orange bitters, garnished with nutmeg. I already made it for a few people and they all said: ‘Holy shit, Eddy, this is amazing!’ The illustrations on the menu are made by Len Vonk, a Dutchman living in Canada. He perfectly translated what I had in mind. His imagination works like mine, but then with a pencil on paper.”

Which people inspire you most at the moment?

“There are two people I really admire. The first is Martin Eisma, a fantastic bartender who works at Salmuera in Amsterdam. I have a lot of respect for his way of thinking and presenting his drinks. The other is Alex Atala, a Brazilian chef. If I ever have the opportunity to create a food pairing with his food, I will do it for free. We talked a bit on Instagram and he told me that, if I ever come to Brazil, I am more than welcome to visit him. I’ll hold him to that!” 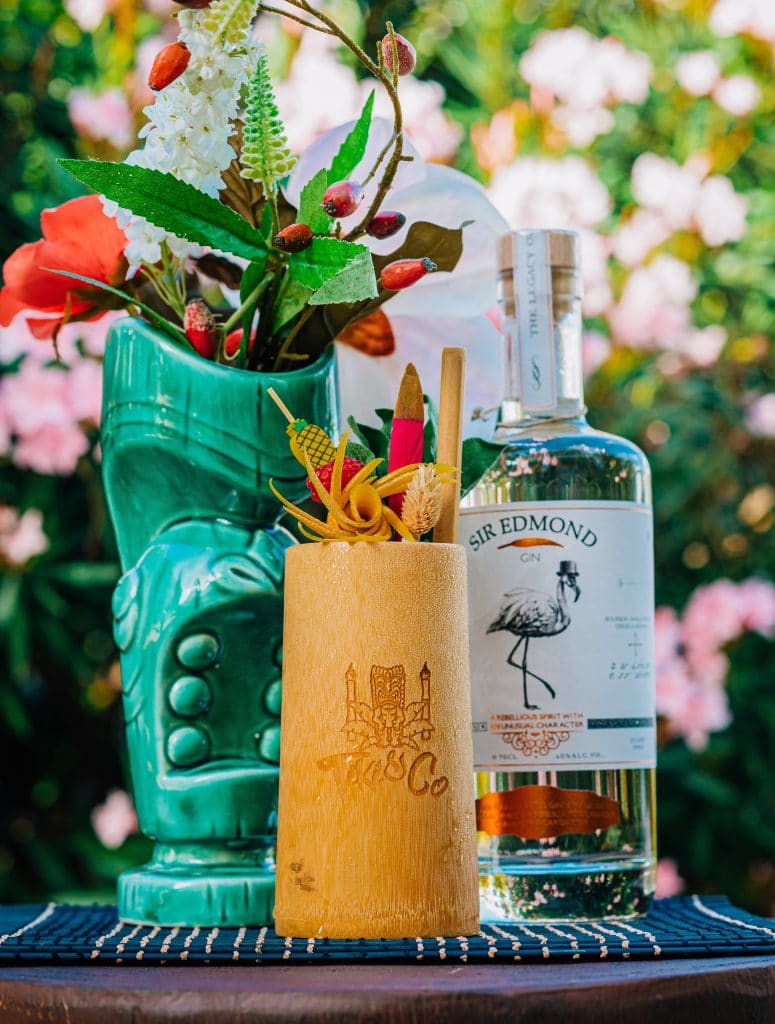