The man who transformed surfing

ou can wake us up for a surf trip to Hawaii, anytime. Home to waves that are both tempting and terrifying, the island paradise in the middle of the Pacific Ocean is the birthplace of surfing and surf culture. One man single-handedly transformed the sport from a local curiosity to a worldwide lifestyle: Tom Blake. This is his story.

Imagine paddling out on a super-heavy surfboard made of solid wood. No fin, no waxed deck, no ankle strap. Up until the twenties of the previous century, that’s how Hawaiian surf legends like Duke Kahanamoku caught the waves of Waikiki. And then Tom Blake came along.

Blake was born in 1902 and grew up in the state of Wisconsin, nowhere near an ocean. After graduating from high school, he lived a nomadic life that took him all over the United States, until he settled down in Santa Monica. Blake worked as a lifeguard and a stuntman in Hollywood before traveling to Hawaii for the first time in 1924, a trip he would make every year for three decades (with the exception of the war years). While in Hawaii, he lived in a beach shack or on a boat — he would live out of his car or van for most of his long life — and learned everything there was to learn about the local sport that fascinated him: surfing.

He befriended Kahanamoku and his five brothers, all skilled surfers, and started experimenting with a lighter surfboard by drilling hundreds of holes in it and then covering them with a thin outer layer. In 1929, Blake made his first hollow board (patented three years later), effectively making the sport available for everyone who couldn’t handle the weighty ones that were being used at the time. Blake was also the first to attach a fin to his surfboard. “My first wave revealed the truth,” he later said about his revolutionary invention. “Never before had I experienced such control and stability.” 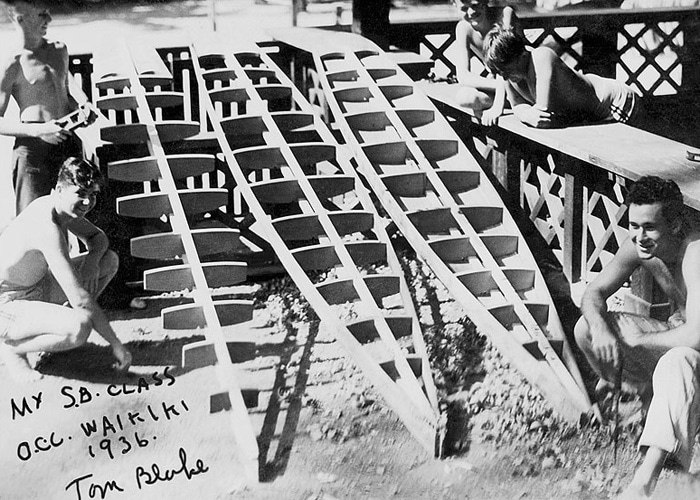 Throughout his life, Blake continued to experiment. He laid the foundation for windsurfing by installing a sail on a surfboard, he was one of the first to build a waterproof housing for a camera so he could take underwater photographs, and he published the first book on surfing, called Hawaiian Surfboard (1935). But most importantly, as Blake’s biographer put it, “his unorthodox lifestyle would one day become the accepted standard for the beach culture.”

By 1955, Blake decided that Hawaii had become too crowded and left the island for good, resuming his nomadic life on the mainland. He once again lived in his vehicle, mostly parked on the Lake Superior shoreline close to where he grew up, owning very little and religiously committed to vegetarianism. It wasn’t until 1986, at the age of 84, that the surf pioneer decided his vagabond days were over and moved into an apartment. He died on 5 May, 1994 in Ashland, Wisconsin, leaving behind a legacy that deserves to be celebrated every time someone paddles out to catch a wave, however big or small. Thomas Edward Blake, we salute you.